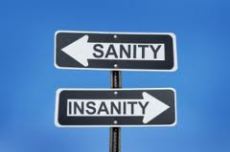 The constant conundrum of addiction: HOW TO GET OUT OF MY OWN WAY.  What does THIS MEAN?!  If I knew what the hell it meant, I would have GLADY moved out of my own way several years ago, but it was the biggest mystery of my life.  Of course I knew I kept messing things up and destroying my life.  If not completely destroying, I was always a hair follicle away from the edge, but what was this self-destructive factor that I needed to remove?  It’s like a blind spot.  I drew a complete blank when I was faced with the idea of “getting out of my own way.”

Perhaps I’m a little slower than others, or maybe I over-analyze, but when I finally began getting out of my own way, it was through the saying, “Do the next right thing.”  This little ditty was a damn life-saver for me.  It was like someone finally threw me a bone and gave me something to chew on.  Doing the next right thing became a tape I played in my head at all times, yet still, I had no clue that this was the simple answer to my enormous problem.

Doing the next right thing is valuable.  It’s NOT picking up a drink or drug under any circumstance, because that would be the WRONG thing to do.  It’s NOT being an asshole when I’m angry.  It’s NOT putting myself first above others.  It’s NOT manipulating, lying, running from life, or trying to be in control of everything.  Doing the next right thing is basically telling my addict mind to take a flippin’ hike, while my soul leads the way.  This keeps me out of trouble, and helps me stay present.  It gives me the ability to take a step back from my reactive thoughts, and to make better decisions.  What a phenomenon!

They say that most addicts are intelligent… PSHHHH!  Why do such simple concepts boggle our minds?

Most human beings try too hard, and most addicts think way too much.  We are in our heads more often than not, and when it comes to moving down into our emotions, we would rather go down into the bottom of a liquor bottle, or into a baggie (depending on what kind of addict you are).  It’s equivalent to telling a fish to spend a day on land.  FEELING to us, is foreign.  Thinking is what we do best, but obviously the result is dismal.  So instead of forcing myself to drop down into my emotional body all the time, I’m whispering to myself, “Just do the next right thing.”  This is the quickest way to become humble and to get back down to earth, out of the demise of my addict mind.  There are no reactive actions, no dramatic Jerry Springer moments, and no destructive behaviors with this.

We all like quick fixes… well, here’s the greatest quick fix there is…. DO THE NEXT RIGHT THING.  Be aware of what you are about to do in any situation, and immediately switch it up with this shot of reality.  And if you’ve already stepped into a messy situation due to anger, or just out of habit, it’s not too late to stop yourself from going further into the drama… simply DO THE NEXT RIGHT THING, my friend.  That’s what I’m doing today… before I self-destruct!